Duke Nukem Wiki
Register
Don't have an account?
Sign In
Advertisement
in: Duke Nukem Forever levels, The Doctor Who Cloned Me levels

The Doctor Who Cloned Me

The Burning Bush is the twelfth chapter of The Doctor Who Cloned Me and the name of a Nevada brothel that serves as a front for an EDF base. The brothel is owned and managed by Dr. Valencia, an undercover EDF operative and scientist.

The level begins with Duke and Dylan dropping off General Graves. Before the two drive away, Graves tells them to head to The Burning Bush and to ask for Dr. Valencia, who can grant them access to an underground EDF base. Duke and Dylan drive the damaged Triptych School Bus to the brothel. When they arrive, Duke visits with Dr. Valencia, and Dylan goes to see his girlfriend, Sally. At first, Dr. Valencia suspects Duke may be another Dukeinator trying to break into the base, but Duke's flirtatious sense of humor convinces Dr. Valencia that he must be the real Duke Nukem. Valencia agrees to show Duke the base if he performs some chores first. Briefly, the chores involve: Refueling a generator, driving away disrespectful customers from the brothel, and exterminating rats in the basement. After completing Dr. Valencia's chores, Duke and Dylan are granted access to the secret EDF base.

There are two new ego boosts on this level that cannot be found on any previous level: 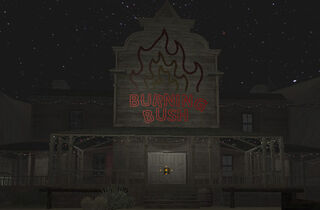 Front of the brothel 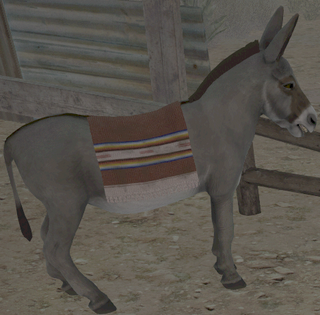