Urban Jungle
Stadium is the ninth and final level of Shrapnel City in Duke Nukem 3D. The level entirely revolves around a boss fight with the Cycloid Emperor.

The player begins on an elevator that rises to the center of a football stadium.

The stadium is a simple, rectangular arena, with a football field in the center and a flat set of bleachers around the perimeter. Weapons and items can be found in the bleachers.

Although the Cycloid Emperor is initially the only enemy present on the easiest difficulty, a group of cheerleaders can be killed, which will cause more enemies to spawn. On higher difficulty settings, four to eight Assault Troopers will also start the level on one end of the bleachers.

A "Duf Beer" blimp can be seen hovering above the stadium. Shooting the blimp with the RPG or Devastator will cause it to explode, showering the stadium with the following weapons and items:

Separate ammo containers for each of the weapons are also included.

There are no secrets on this level. 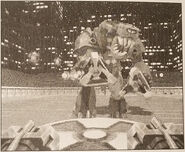 Another image from the guidebook

Map from the guidebook, which differs from the final version

Fighting the Cycloid Emperor on Stadium