This page refers to the Duke Nukem 3D weapon. For other uses, see here.

The RPG, short for Rocket Propelled Grenade, is one of the most powerful weapons in Duke Nukem 3D and its many ports and expansions.

A chrome, cylindrical belt-fed weapon that is held like a Sten gun and is capable of firing massively-damaging rockets.

The RPG and ammo for it are rare, which is understandable for such a powerful weapon. Nevertheless, it can often be obtained early in the game as a secret item.

No enemies will drop ammo for this weapon.

The RPG appears in LameDuke, but has a few differences when compared to the final game’s RPG. The most noticeable of them is that the RPG had a “draw” animation that much be played when the player first hits the fire key. This was probably removed because of how clunky it is. Only the final part of the animation remains in the final game, and even then it has been altered (such as the removal of the hand on top of the gun).

LameDuke RPG not in position. 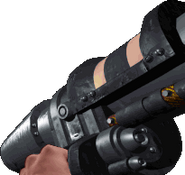 Pulling the LameDuke RPG up. 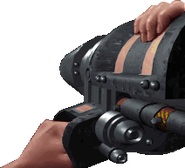