The Pistol is Duke's trademark, and (arguably) his weakest weapon. Duke has used this weapon in almost each game since Duke Nukem 3D. It is usually accurate and shoots fast, but is not automatic and needs to be frequently reloaded with its low magazines. The Pistol has several variations in Duke Nukem games, like the Desert Eagle or the M1911 and became one of Duke's most symbolic guns.

The Pistol is a dark grey handgun, mostly resembling a Glock 17. It is invariably the first weapon the player will use/find in each game.

The Pistol has a high rate of fire, but each of its magazines only hold 12 rounds, meaning it needs to be reloaded, which takes time. It also has a high accuracy and can be used to shoot switch buttons in the game.

Even though they do not use Pistols, Assault Troopers and Assault Captains will occasionally drop ammo for the Pistol when they are killed. They are known to be 9mm PAK.

The Pistol in DN64

Lameduke Pistol ammo.
Add a photo to this gallery

The M1911 Pistol is a Colt pistol modified to include Duke’s symbol on the grip. It is the first mandatory weapon picked up. It packs the most punch when aiming for the head, inflicting quadruple the damage. It also has the fastest Melee attack in the game, about twice as fast as any other weapon.

The first one found in the game is the only gold-plated one. All M1911s obtained later from EDF soldiers and Pigcops are the original dull black finish.

Both the 1998 and 2001 trailers for DNF show different designs for the Pistol/M1911. The 1998 trailer shows a futuristic, round design that has a scope attached to it to act as more of a 'Sniper pistol'. The scope could actually be used to zoom in, as seen in the trailer.

The 2001 trailer shows the Pistol as a gold Desert Eagle. Marketing material from that period also show Duke wielding a Desert Eagle. This pistol also appeared in a promo picture released for the current version of DNF in 2007. While it was removed in favor of the M1911, the Desert Eagle can be found wielded by the statue the Pigcops are toppling in the 2011 reveal trailer.

In the DNF Balls of Steel edition art book, there are several pages describing the history of Duke's pistol to the current format. The developer's write that originally the gun was designed to have a scope and be very high-tech looking, but was later altered into a golden desert eagle that was kept for a large amount of time, before being swapped out to a M1911. Images on the page show they played with several scoped gun designs, including a revolver of unknown make, M1911, and a Desert Eagle. On a separate page the writer mentions that they wanted the gun to be so accurate to a real gun that George Broussard brought a real M1911 into the office to assist in making the in-game model look and sound like the real thing. (an action that proved frightening when a co-worker picked it up and started playing around with it).

The DNF Pistol went through various incarnations while the game was created:

The 2001 Pistol while it was still a Desert Eagle that was shown in the 1999 trailer. 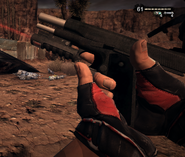 The M1911 reload.
Add a photo to this gallery

Retrieved from "https://dukenukem.fandom.com/wiki/Pistol?oldid=25993"
Community content is available under CC-BY-SA unless otherwise noted.