This page refers to the Duke Nukem 3D enemy. For other uses, see here.

Duke Nukem 3D was the first game to introduce the Pig Cop, which has since become a staple enemy in the Duke Nukem franchise.

Mutated from police officers in the L.A.P.D., the Pig Cops are muscular, humanoid boars that were created by the aliens to do their bidding. The Pig Cop has a mohawk running down its back, an underbite to accommodate its long tusks, and red eyes that glow in the dark. It wears a tattered blue police uniform and black boots. It bears the letters "L.A.R.D." on the front and back of its uniform and carries a small yellow badge near its left shoulder. It wields a Shotgun.

Notably, the Pig Cop only appears on Earth-based levels; it is the only recurring enemy from L.A. Meltdown that does not appear at all in Lunar Apocalypse (except as two corpses found on Dark Side).

In the wake of the George Floyd protests, Randy Pitchford, a developer who worked on Duke Nukem 3D: Atomic Edition, tweeted, "I was tormented at starting in this industry in [the] wake of the Rodney King riots - you could feel it in our art (pigcops). Injustice persists, frustration grows. ... [W]e've been dealing with this for a long time. How do we create a world where no cops are Pigcops?"

The Pig Cop moves very slowly, making it an easy target, but it has relatively high health, matching that of the Enforcer.

The Pig Cop always fires its shotgun in volleys of two evenly timed blasts, making its shots easy to predict. It is capable of shooting from either a standing or lying position.

Unlike the Enforcer or Battlelord Sentry, the Pig Cop can deal massive hitscan damage instantaneously. If the player has less than 50 health, then there is a nonzero probability that the player may be unavoidably killed by the next Pig Cop encounter. This is a danger posed by no other enemy in the game. Given that other enemies such as the Octabrain, Assault Commander, and Protector Drone are so easily dodged that they are unlikely to deal any damage to a skilled player, it is arguably more appropriate to use the RPG, Shrinker, Expander, Devastator, Freezethrower, and Incinerator on the Pig Cop than on any of these other enemies.

Upon dying, the Pig Cop may drop either a Shotgun or Used Armor. Unlike other Shotguns in the game, those dropped by Pig Cops only contain one to four bullets, and unlike other Armor in the game, Used Armor provides only 50 or 75 armor.

The Pig Cop is capable of dealing up to 49 damage per shotgun blast.

Each pellet fired by the Pig Cop uses the same variable as the player's Shotgun to determine its damage, which is set to 10 damage per pellet. (It is not obvious why the first pellet to hit the player always deals 9 damage instead of 10.) The precise amount of damage dealt depends on how many pellets hit the player, which is determined according to a random hitscan function.

The Pig Cop does not have perfect accuracy. Although the Pig Cop may sometimes hit the player from incredible distances on levels like Golden Carnage, hitscan projectiles follow a trajectory at an angle within a random interval determined by the ANGRANGE and ZRANGE variables. Therefore, the Pig Cop should be less accurate at greater distances.

In ports and expansions

The Duke Nukem: Total Meltdown title screen. Note that the Enforcer, which appeared in the title screen of Duke Nukem 3D, was replaced by a couple of Pig Cops.

A cartoon Pig Cop on a screen in the Xbox 360 Dashboard theme.

An early version of the Pig Cop. Their weapon appear to be a double-barreled shotgun.

An early version using a different design. Here the Pig Cops appear to have nightsticks and black vests.

Unused frames with the Pig Cop hitting the player with its gun. This would've most likely been used as an melee attack if the player would venture too close.

Concept art showcasing the face/head of a Pig Cop.

Concept art showcasing the body of a Pig Cop. It has a double-barreled shotgun, nightstick, a vest with the text "POLICE" instead of "L.A.R.D.", but the same boots and torn uniform. 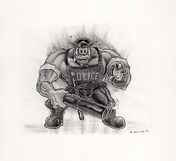 Another concept art which showcases a Pig Cop very much in the same vein as the previous picture although wearing a police hat. 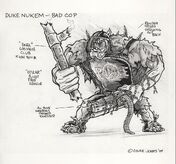