The Hive
The Octababy is an enemy in Duke Nukem Forever.

The Octababy is an Octabrain in infant form. It cannot fly or deploy the psychic energy attack associated with its adult counterpart. It is limited only to melee attacks that involve jumping at the player. Like the Octabrain, the Octababy can swim underwater and is frequently encountered in groups on water-based levels. It is also sometimes seen emerging from air ducts on land.

The Octababies are born three at a time, exploding violently from the bodies of human women. These women are being held captive by slimy green tentacles that envelop the women's bodies. It is implied the women may have been impregnated by the Pregnator. 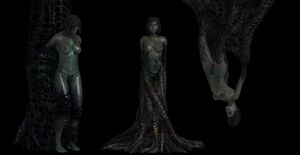 The Octababy has very little health and deals minimal damage.

Because the Octababy is easy to kill with melee attacks, it usually poses little threat on land. It is only underwater that it become significantly more dangerous, since it is small and hard to hit.

Hitting an Octababy with a Shrink Ray pulse will cause it to shrink even smaller. It will still try to attack Duke, but it will likely miss and will end up killing itself if it hits a hard surface on the way up (like a ceiling). The Shrink Ray can still work on an Octababy while Duke is shrunk, but it appears to take (at least) 3 shots to have the same effect and the player cannot stomp on them.