The Nuke Radiation logo is the iconic symbol of Duke Nukem and it appears in every Duke Nukem game to exist.

The symbol is always seen as Duke Nukem's belt buckle and is often seen on some of Duke's weapons. It also appears on his vehicles as well as some barrels and crates in the games.

The Nukem logo is an inverted radioactive trefoil symbol, the internationally used hazard symbol used to alert to the danger of radiation.

The Nukem symbol is only seen a few times in the first two games as logos on radioactive barrels.

Duke Nukem 3D was when the Nukem logo became the iconic symbol it is today, appearing for the first time on Duke's belt. It was used as the switch to end levels and continue onto the next level.

It also appeared on the scenery in the game such as the elevator where Duke rises up into the Stadium to fight the Cycloid Emperor.

The Nuke symbol for the Duke Nukem 3D XBLA version 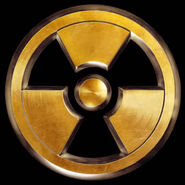 The gold-plated logo in DNF