Internet download only
LameDuke is an early prototype of Duke Nukem 3D that was compiled December 30, 1994 and later released as freeware.

LameDuke was released on January 29, 1997 to commemorate the one-year anniversary of Duke Nukem 3D's initial shareware release. It was released as-is, without any promises of technical support or compatibility. It is still free to download today.

LameDuke is only one of several known Duke Nukem 3D prototypes. LameDuke was preceded by Duke Nukem IIID and the April 1994 Build Demo. It was followed by the 1995 prototypes, beta version 0.99, and shareware version 1.0, the last of which was also released in advance of the commercial version and is noticeably different from it.

LameDuke features significantly different levels, enemies, weapons, and items than the Duke Nukem 3D commercial release. The prototype is also notable for featuring stylistic design elements and assets resembling those from Duke Nukem II, though the project diverged from its predecessor later in development. Of LameDuke's 31 levels, E3L2 and E3L8 were kept more-or-less wholesale in the final version and can be found on the commercial levels Derelict and Overlord, respectively. Small parts of other levels may have also served as proof-of-concepts for commercial levels, and some parts were even directly copied-and-pasted into levels that would appear in the final version. The prototype includes four episodes, presented in the following order: 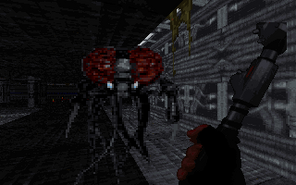 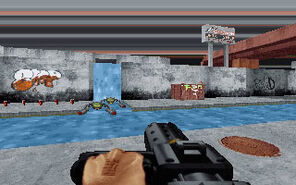