Floppy disks, download
Duke Nukem II is the sequel to Duke Nukem. It was developed and published by Apogee Software on December 3, 1993.

A year after his victory over Dr. Proton, Duke is advertising his latest book, Why I'm So Great, when he is suddenly abducted during a talk show by the evil Rigelatins, an alien race willing to conquer Earth and enslave the human race. The Rigelatin emperor reveals to Duke that they plan to take his brains and use it to direct their conquest. However, while waiting for being decerebrated, Duke manages to escape using his secret explodo-molar to destroy the bars of his cell, and finds a gun directly outside.

From then on, Duke fights his way across the surface of Rigel, encountering many Rigelatin minions, and eventually destroys the energy reactor of one of the planet's cities (causing massive destruction within the city itself), before venturing deep under the surface of the planet, killing a few Rigelatin commanders in the process. Finally managing to come back to the surface in a mountain range, Duke assists to the taking off of the Rigelatin battleship, heading to Earth. He barely manages to make it aboard, and then fights his way up until reaching the cockpit, destroying the Rigelatin commander and putting an end to their threat. Sealing off the rest of the ship, Duke admires Earth and contemplates taking it over as "King Duke", before acknowledging that it doesn't sound right. He then sets off to land on Earth, leading directly into the events of Duke Nukem 3D.

Duke Nukem II is a side-scroller like the original, except with many new features and more interactivity. The player's goal is to proceed through the levels, taking advantage of the weapons, health items, and power-ups.

The game is very similar to the original, with improved graphics, sloped surfaces and the notable ability to fire upwards and downwards.

Duke Nukem is on foot throughout most of the game, but some levels have him inside a vehicle. The game is split into four episodes, each consisting of 8 levels. In the last level of each episode, the player faces a Rigelatin as a boss.

Weapons are found in green crates and look like round coins with one of four letters on them:

The weapons and ammo are carried with Duke Nukem to the next level.

The Steam/iOS version has a few differences from the original/GoG release of the game: 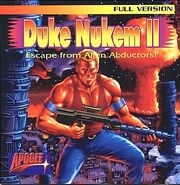 Full retail version in the Netherlands 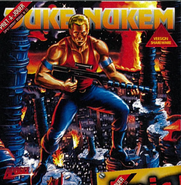 Shareware version in France, as seen in Issue 64 of Joystick Magazine