The Nintendo 64 port features significant changes from the PC version, including modified and expanded levels and a different set of weapons. The port also includes a four-player deathmatch mode and a two-player co-op mode via split-screen. The game's mature themes have been minimized to satisfy Nintendo's adult content standards.

In July 2020, the game was ported to the PC as part of the Rednukem project.

In the Nintendo 64 version, levels are not divided into episodes. Instead, levels are always completed in an unbroken sequence beginning with Hollywood Holocaust and ending with Stadium. In the PC source port, levels are divided into the original Duke Nukem 3D episodes.

Almost all of the original levels from Duke Nukem 3D are present, but the secret levels Spin Cycle and Tier Drops have been replaced by two levels from the Atomic Edition, namely Duke-Burger (accessible via Gun Crazy) and Area 51 (accessible via Movie Set).

In addition, The Abyss and Overlord have each been split into two levels.

Many of the levels exhibit significant changes from the PC version, most notably Rabid Transit.

The levels progress as follows:

There are also four multiplayer-only levels. Piracy is a modified section of the level Babe Land from the Atomic Edition, and Noctis Labyrinthus is a secret level, only accessible via a secret exit button in Shaft.

Some weapons have been replaced with new ones, and three weapons now support secondary ammo types.

In Duke Nukem 64, captive women can be freed from alien pods, a feature that did not exist in Duke Nukem 3D. Alongside the number of enemies killed and secrets found, the total number of "Babes Saved" during a level is now displayed on the level-end screen after hitting the exit button.

Concomitant with this change, captive women can no longer be killed, and they no longer say "Kill me..." when Duke is standing near them. In addition, all captive women found underwater or hanging from ceilings have been replaced with mangled corpses, since they cannot be freed. In the game's memory, there are unused animations of the captive women breaking free from alien pods, but in the final version, they merely sparkle and vanish when freed.

A few gameplay mechanics from Duke Nukem 3D have been removed from this version of the game. 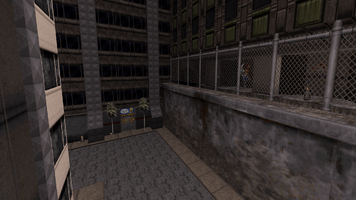 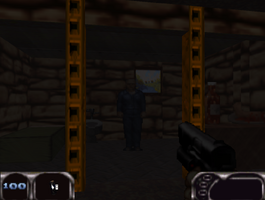 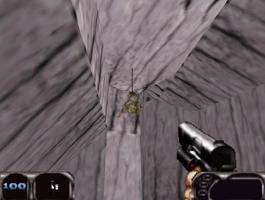 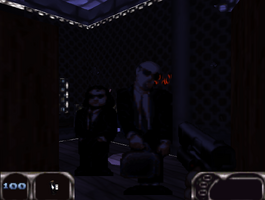 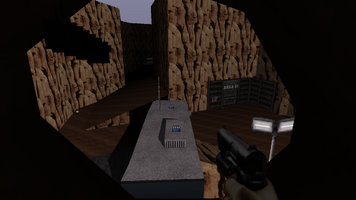 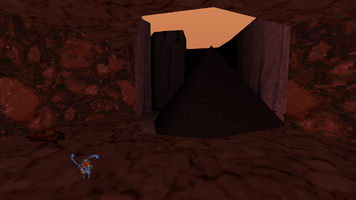 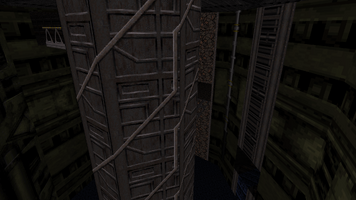 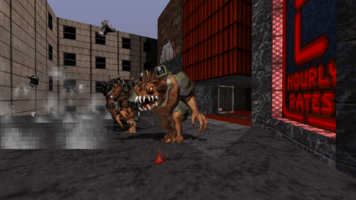 New enemies have been added to some levels (Image: Hotel Hell)

Duke Nukem 64 has many known software bugs. Briefly, these include the appearance of multiplayer-only Expander sprites during singleplayer, looping sound effects, scrambling map layouts when standing atop certain doors, enemies spawning inside of walls, exploding when touching certain surfaces, and multiplying elevators during multiplayer.