First-person shooter
Duke Nukem 3D is the name of a handheld video game that was sold as a standalone unit in the "Grip Games" toy line by Tiger Electronics. Loosely based on the desktop PC game of the same name, the unit was developed and manufactured by Tiger Electronics, licensed by 3D Realms, and published by GT Interactive in 1997.

The manufacturer recommends the toy for children aged 5 years and older, and in the product's official blurb on 3D Realms' website, it is described as "not all that difficult" and "a good idea for kids."

The Duke Nukem 3D Grip Games unit consists of a handheld stick with a built-in LCD screen. The display consists entirely of black pixels that can be turned on or off, though cyan bars corresponding to the HUD are permanently inked into the bottom portion of the screen. Buttons on the top of the unit allow for four-directional movement, toggling the sound on or off, and powering the unit on or off. A trigger on the front of the unit is used to fire the player's weapon. The unit is designed to be held like a pistol, with the player's thumb operating the movement buttons.

There are five in-game levels, culminating in a confrontation with the Battlelord on the final level. Each level is non-linear, with multiple routes to completion. The in-game HUD has slots for health, ammo, and inventory, the latter of which includes both weapons and items. Weapons and items from the inventory can be selected by pressing the down arrow on the controls. There is no Armor in the game. Enemies, weapons, and items are all based on those from Duke Nukem 3D for the PC. Weapons include the Pistol, Shotgun, Chaingun Cannon, and RPG. Items include the Portable Medkit and Access Cards. Recurring enemies include the Assault Trooper and Pig Cop. The first four levels are completed by reaching the exit, and the last level is completed by killing the Battlelord.

High-resolution image of the front cover

Back cover of the packaging 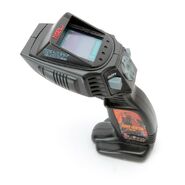 Handheld unit, removed from the packaging