Duke Nukem Forever
Duke Nukem is an American hero and worldwide cultural icon who has repeatedly saved Earth from armies of hostile robots, alien invaders, and mutant pig cops. He is the flagship character of an entire franchise named after him.

Little is known about Duke's early life. Prior to the events of the canonical Duke Nukem franchise, Duke served in the US Army under General Graves and was stationed in Beirut, where he became friends with Dylan. Sometime later, Duke left the Army to work for the CIA.

At the start of Duke Nukem I, the evil Dr. Proton had successfully captured "Earth's largest city," and Duke was sent by the CIA to take it back. Duke successfully defeated Dr. Proton and his army of Techbots, thus saving all of humanity from enslavement. As a result, Duke became celebrated worldwide as the hero of Earth. It is also around this time that Duke was recruited by the secretive Earth Defense Forces and started his nationwide Duke Burger restaurant chain.

Sometime after defeating Dr. Proton, Duke began writing his memoir Why I'm So Great, a book all about his heroics. While presenting his book on a talk show in Neo Los Angeles, Duke was kidnapped by an alien race known as the Rigelatins, thus initiating the events of Duke Nukem II. Impressed by his show of skills against Dr. Proton, the aliens captured Duke with the intent of harvesting his "brain patterns" and using them to power the X5G Thinkomatic War Computer and ultimately conquering Earth. However, Duke escaped his imprisonment and fought the aliens on the Rigelatin homeworld. This ordeal ended with Duke crushing the Rigelatin leaders and escaping their planet in a Regelatin Skycar.

Duke returned to Earth only to have his Skycar shot down by another race of alien invaders, a scene captured in the opening moments of Duke Nukem 3D. This new race of aliens came to Earth to abduct all of the women, and they transformed the Los Angeles police department into an army of mutant pigs to do their bidding. Across a series of missions orchestrated by the Earth Defense Forces, Duke eventually defeated the alien invaders by destroying a large portion of their invading forces. In the process, he managed to kill several of the alien leaders, most notably the Cycloid Emperor and Alien Queen. Having saved humanity for the third time, Duke became even more famous and culturally glorified as a result.

It is around this time that Duke would have confronted Mech Morphix, the Zorgonites, and, using time travel, alien forces in the past and future.[1]

In the peaceful years after the alien invasion of Earth, Duke enjoyed his hard-won fame to the fullest, becoming a successful businessman and celebrity multimillionaire. He took up residence in the penthouse of his Lady Killer Casino in Las Vegas, Nevada, and he continued to operate his booming restaurant chain.

Many years later, the alien invaders returned to Earth, purportedly to make peace with humanity. However, the aliens quickly turned violent, precipitating the events of Duke Nukem Forever. The aliens again began kidnapping women and launched a targeted assault on Duke Nukem with their mothership. Fighting his way through war-torn Nevada, Duke managed to kill the aliens' new queen, helping the Earth Defense Forces to secure Las Vegas. Upon discovering that the Hoover Dam was being used to power a massive portal that was transporting alien invaders to Earth, Duke destroyed the dam. This severely crippled the alien invasion and proved to be a decisive victory in the war. However, the event captured the attention of the US President, who was immediately flown to the site of the wreckage. The President confronted Duke and revealed that he was conspiring with the invaders, and in his fury, the President ordered a nuclear strike on Duke's location. Before the President could escape, the new Cycloid Emperor intercepted and killed him, but the Cycloid Emperor, in turn, was immediately killed by Duke Nukem. Duke was rescued by General Graves before the nuclear strike.

With the President dead, Duke announced his candidacy for the 69th President of the United States. However, he was immediately captured by a resurgent Dr. Proton and taken to Area 51. This culminated in the events from the Duke Nukem Forever DLC pack, The Doctor Who Cloned Me. Dr. Proton, who had been brought back to life by cybernetic augmentation, planned to use clones of Duke Nukem to extinguish surviving alien forces that were based on the Moon and were staging another invasion. In addition, Proton wanted to use these clones to ruin Duke's reputation, as Duke had previously done to him. Ultimately, Duke decapitated Dr. Proton, thus stopping him for the last time. Together with General Graves and his friend Dylan, Duke escaped his imprisonment at Area 51 and annihilated Dr. Proton's army. With Dylan's help, Duke was able to use a teleporter to reach the alien base on the Moon, where he discovered the true leader of the invasion: the Alien Empress. In the end, Duke defeated the Empress, winning the affection of many rescued women in the process.

Duke Nukem has only ever been seen in top physical condition. He is 6"4" and able to bench press at least 600 lbs. In fact, he is strong enough to overpower many inhuman enemies in combat, including cyborg Dukeinators and raging mutant Pig Cops. His Mighty Boot attack in Duke Nukem Forever has been shown to decapitate enemies, and he can rip the heads off of alien bodies using brute strength alone. He is even tough enough to trek unprotected across the hostile surface of the Moon.

Marksmanship and demolitions are two of Duke's specialties. Duke has demonstrated unmatched proficiency with all types of firearms and explosives, including everything from pistols and rocket launchers to shrink rays and alien weaponry.

In terms of his personality, Duke Nukem is completely confident in himself and his abilities, often accomplishing Olympic feats through sheer willpower and brutish aggression. He is quick to wisecrack and frequently speaks his mind, but he cares little for his detractors, as he knows his heroic accomplishments speak for themselves.

Duke Nukem is also famous for his signature style. Duke is never seen without his signature sunglasses, red tank top, and blue jeans. He is also outfitted with a black combat harness that contains many utility pouches for extra ammo or explosives. His hairstyle is a platinum blond, military-style haircut. He is rarely seen without his favorite sidearm, the gold-plated M1911, marked with Duke's symbol, the Nuke Logo.

In the very first Duke Nukem game, Duke Nukem has a muscular build. He sports a blond crew-cut hairdo, a pink vest with a white t-shirt underneath, dark blue jeans, and a light blue belt with a gold belt buckle.

In Duke Nukem Forever, Duke's appearance is nearly identical to his attire from Duke Nukem 3D but with a few subtle changes. He now has a silver Nuke Logo on his belt buckle, and he has a black and red pair of fingerless gloves with the Nuke Logo stitched into them. 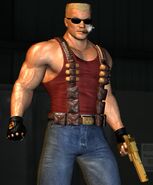 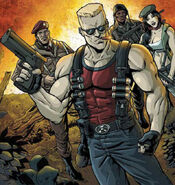