A fan-made total conversion of Duke Nukem 3D titled Total Meltdown TC was released in 2018 and supports simulated gameplay on the PC.

In January 2020, a leaked prototype was shared online.

The story is the same as the original game with the exception of the port's exclusive episode: Plug 'N' Pray. During this episode, Duke is out to battle the aliens again, this time aiming to destroy a very powerful robot they've built to kill him.

The port features all three episodes of the original game, plus one additional episode: Plug 'N' Pray, which includes six extra levels and a secret level. The secret level was also included in the PC version. It features a complete re-rendering of all the weapons and enemies, and a combination of bespoke and rearranged music, some rearranged from the PC version, and some original, in XA streaming audio made by Mark 'madfiddler' Knight, Gamesounds.co.uk.

The game is compatible with analog controllers. The game features a deathmatch mode for multiplayer, but only between separate consoles (i.e. one player per PlayStation).

In January 2020, the anonym user nukemania from the duke4.net forums managed to obtain and dump a preview prototype from Duke Nukem Total Meltdown. Even a superficial analysis of the prototype shows multiple development details about the port: 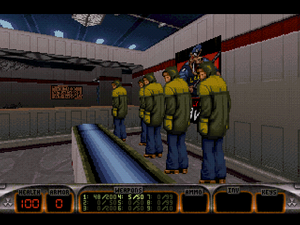 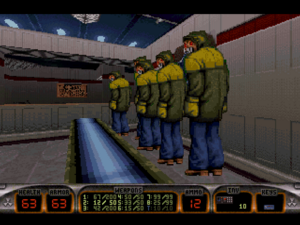 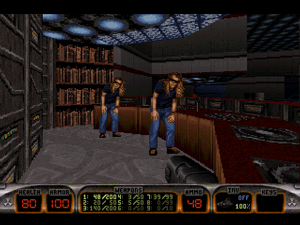 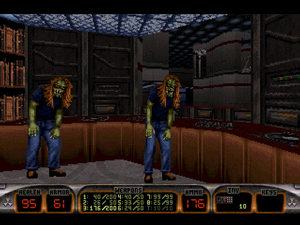 Duke Nukem: Total Meltdown received generally negative reviews from various gaming sites and magazines, mostly due to the frame rate issues encountered during the game, grainy graphics, and limited control customization options. Also, unless every player has their own PlayStation console together with a copy of the game, playing multiplayer against other people is greatly limited because of the lack of split screen support like in the Nintendo 64 version. Due to these factors, some fans consider the PlayStation port to be the worst of all the ports together. However, the remixed soundtrack in Total Meltdown has got a positive response from fans. The game runs slightly better under emulators, and this port has been somewhat re-evaluated thanks to the exclusive episode which has been positively received by the community.

Title Screen with no resize