Singleplayer
Duke Nukem: Mass Destruction was a top-down action RPG that was licensed by 3D Realms and developed by Interceptor Entertainment.

In response to mounting legal pressure, the game was stripped of all references to Duke Nukem and was rebranded as Bombshell. Bombshell was released in 2016. Shelly "Bombshell" Harrison, the titular character of the new game, was a scrapped character from Duke Nukem Forever.

Although never publicized, 3D Realms quietly registered the domain names alloutofgum.com and nogumneeded.com sometime in January 2014. On the two websites, an image of an empty pack of chewing gum was shown alongside a Duke Nukem logo and a written storyline for "Duke Nukem: Mass Destruction a.k.a. Project Ascender." The websites were first discovered by game developer Samuel "Lunick" Schultz and shared in a Duke4 forum post. A Facebook page was also registered for Duke Nukem: Mass Destruction, and a promotional Twitter account was setup under the name @kyrriscoming, in reference to the Kyrr race of aliens from the game.

Duke Nukem Forever, which 3D Realms had been developing since 1997, still was not finished by 2009. In June of 2009, 3D Realms announced the game's cancellation. In 2010, possibly as an effort to avoid bankruptcy, George Broussard of 3D Realms sold the Duke Nukem IP to Gearbox Software, which immediately recruited Allen Blum and several other creators of the Duke Nukem series to finish the game.

After successfully launching Duke Nukem Forever in 2011, Gearbox Software proceeded with plans to develop another reportedly "big-budget" Duke Nukem game, rumored to have been Duke Begins. While finalizing a deal to publish the game, the project was effectively canceled in February 2014 when the publishing company withdrew from the project, solely on the grounds that 3D Realms had recently licensed Interceptor Entertainment to use the Duke Nukem IP in Duke Nukem: Mass Destruction. For this reason, the publishers no longer trusted that Gearbox Software was being fully transparent about any legal agreements they had with 3D Realms, and they did not want to risk financial ruin by publishing a game developed by a company that might not actually own the rights to the IP.

As a result, Gearbox Software filed a lawsuit against 3D Realms in early 2014, arguing that 3D Realms had already forfeited the rights to Duke Nukem.

Soon after the lawsuit was announced, 3D Realms was bought in March 2014 by SDN Invest, the same holding company that owned Interceptor Entertainment, the developers of Duke Nukem: Mass Destruction. Responding to legal pressure from Gearbox Software, SDN Invest decided to replace Duke Nukem with Bombshell, an IP that was recently acquired as part of 3D Realms, as the new protagonist in Duke Nukem: Mass Destruction.

All references to Duke Nukem were removed from the game, and the assets from Duke Nukem: Mass Destruction were completely rebranded as Bombshell, which was released January 29, 2016.

One of the game's promotional websites, alloutofgum.com, provided an official storyline for the game:

The King makes his next generation debut in Duke Nukem: Mass Destruction. A Top down Action RPG game for PC, PlayStation 4 and Xbox One. Duke Nukem kicks ass across planets in an unreal engine - powered galactic adventure to save the President from an apocalyptic alien threat. All new enemies, a never before seen arsenal of devastating weaponry and series first mechanics; including experience points and tech trees, will let Duke rip 'em a new one in a way he never has before.

Few could have predicted the great catastrophe. The devastation from the start. A once peaceful and prosperous race, the Kyrr fell victim to this mysterious and terrible force. Their flourishing homeworld, Kyrron, reduced to a planet ruled by chaos and hostility. A blazing desert wasteland dominated by a neverending struggle for survival.

Kyrron's now lifeless landscape forced them into a life of technological augmentation. Transforming this once cultured people into a marriage of muscle and machine - an existence defined as much by their agony as it was their anger.

And so their bodies were doomed to follow the fate of their eternally ruined world.

Radical changes to Kyrron created Kyrronite, a source of untold power. With it, they brought neighboring worlds to their knees, yet it would condemn them to an even crueler fate, as they would be forever bound to their Kyrronite rich world. A dying planet they so fiercely despised.

But another great force was destined to find them, and with his help, the Kyrr would end their fall from paradise and begin their rise from hell... 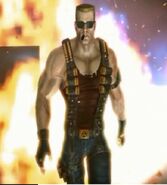 Another leaked image from court files