Duke Lives is the first chapter of Duke Nukem Forever.

The level begins with Duke urinating on a urinal in a stadium building. After messing around in the stadium's bathroom, he walks to the locker room to see EDF troops trying to think of a plan on a whiteboard (dubbed "Operation: Cock Block"). After Duke gives his "creative" input into it, he kicks open the door and sees EDF soldiers storming in to kill the Cycloid Emperor. The Cycloid digs into the ground and sends an electrical pulse, causing a powerful impact, blowing Duke back away and blocking the path. He gets up and takes out his fists. Heading to the elevator, he grabs the Devastator and prepares to battle the Cycloid Emperor. Once he arrives up, he yells "It's down to you and me, you one-eyed freak!".

The EDF soldiers drop ammo supplies, marked by flares. Once Duke weakens the Cycloid Emperor, he climbs up his back and tears out his air supply cable, making him go berserk and drop dead, with his eye falling out. Duke kicks a field goal with it and the Duke Nukem Forever logo appears.

The screen zooms out to reveal that Duke is actually playing his own video game on his console, while being fellated by the Holsom Twins. Duke flips the channels and switches to the news about the recent alien "visitation". The Holsom Twins head down to a party, while Duke takes the elevator from the 69th to the 1st floor for his interview on Johnny O'Lenoman's talk show "Damn! It's Late..."

There are three ego boosts on this level:

There is one voicemail on this level. It is one of 14 voicemails that must be collected throughout the game in order to unlock the "Call Waiting" achievement: 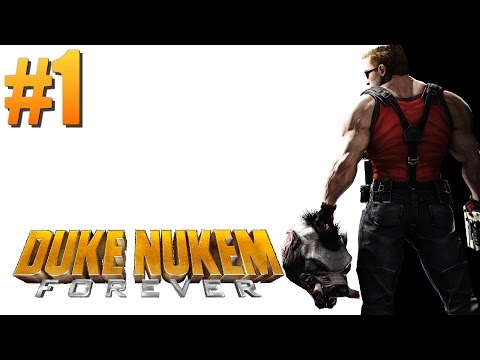