CD-ROM
Duke Assault is a shovelware expansion pack released in 1997 by International Software Values Inc. for Duke Nukem 3D. It contains 1500 user maps collected from the Internet, approximately 100 of which are multiplayer. It also includes a front-end for selecting levels.

The collection has been criticized for its indiscriminate selection of maps, most of which are of very low quality. Many of the maps could be characterized as "troll maps" that instantly kill the player upon spawning. Others appear to be the jumbled scraps leftover from users who opened the map editing utility for the first time and were still learning how to use it. 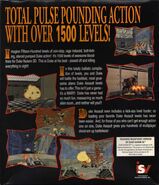 Back Cover of Duke Assault 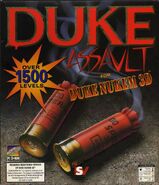