Duke Nukem Advance, like most games, had several features that are not present in the released version. This is due to the nature of game design. Not every feature, character, or level ends up making it into the game due to multiple reasons such as time constraints, story changes, or even engine limitations. The below items pertain to content that did not make the final build as well as items which were modified yet still present in the game.

Below are features or items that are not available in Duke Nukem Advance. These items are cut features. 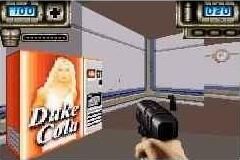 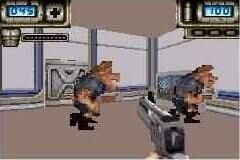 The original Pistol in the game (left) and the Desert Eagle (right) in the same version.

One of the features that the Southpaw Engine could pull off was reflective water. In an early version of Duke Nukem Advance this effect was demonstrated using a vending machine which was leaking water all over the floor reflecting the surrounding geometry. The reflection is displayed in a distorted fashion that one would witness if looking at a reflection seen on the surface of a pool of water. This feature was cut from the final game, though the reason for this features removal is unknown. 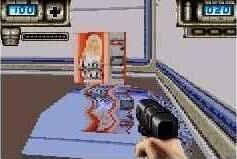 An example of the cut feature as seen in an old build.

Below are features or items that are still available in Duke Nukem Advance though they have been altered from their earlier versions.

One change made during the development of Duke Nukem Advance involves the screen in which the player selects the difficulty setting for the game. The first thing that one would notice is that the word 'Difficulty' can not be found at the top nor anywhere in the old version of this screen. Secondly the images depicting the difficulties are also different. For instance the image for Piece of Cake is that of a baby and not of a young Duke. The image for Let's Rock is similar to that used in the final product with the exception that in the old version Duke does not wear sunglasses and his face is slightly different. Lastly, the final image depicting a skull for Damn I'm Good appears to resemble that of a Grim Reaper in the old build versus a skull of Duke in the finished product. 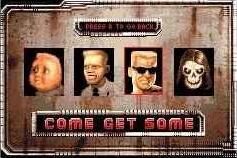 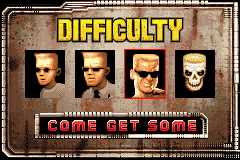 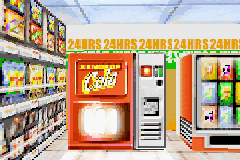 Earlier builds of Duke Nukem Advance lacked any form of ceiling or floor textures - similar to Wolfenstein 3D - in the game due to the game not running at a stable frame rate to support them during that period of time in the games development.[1] Ceiling and floor textures were eventually added later in the development cycle as the frame rate became more stable and the games code became more refined.

The reason for the secrets being changed from a percentage to a fraction is most likely so the player has an easier time knowing how many secrets are available. The Par time being missing is most likely due to the levels being incomplete so a Par time statistic would of have to been changed regularly during the coarse of development. 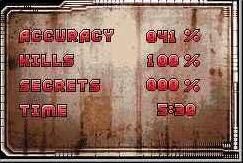 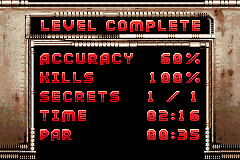