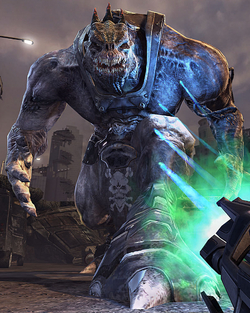 The Battlelord is a title of two bosses in Duke Nukem Forever.

A Battlelord is a high-ranking alien commander. It is a colossal, bipedal lizard with a powerful laser minigun and a built-in mortar launcher. There are two Battlelords in the game, one in Vegas, and the other at the Hoover Dam. The Vegas Battlelord is leading an attack on Duke's Lady Killer Casino, while the Hoover Dam Battlelord, which is much stronger, is protecting the alien "wormhole" portal from EDF assault.

As Duke Nukem attempts to make his way over to the Duke Dome, he is ambushed by a Battlelord that is dropped off via Alien Dropship. The beast jumps down into the pit Duke and a couple EDF soldiers are in, crushing everyone underfoot except Duke.

The only weapons that can hurt a boss at this point in the game are RPG shots, Pipe Bombs and Laser Tripmines. There is an EDF ammo crate and Explosives Cache by the entrance to the pit and another EDF Crate at the opposite end, newer the sewer entrance. Each crate has an RPG sitting on top. The player should ensure they have an RPG equipped and a full lineup of explosives by the time the Battlelord arrives on the scene. There are also some explosive barrels laying around (at least before the Pigcops arrive). Throwing one at the Battlelord is risky, but it's 150 dmg., regardless of difficulty.

The Battlelord's speed varies depending on how aggresive he goes after the player (It tends to pick up more speed as it's health declines). Unless he charging to kick a car at the player or trying to flush them out of cover, they tend to move slowly across the area. While the player has ammo and explosives, stay along centre of the area, opposite of the Battlelord. With the RPG's lock-on ability, the player only needs to see a small part of the Battlelord to lock on fire, allowing the guided grenade to do the rest. If the Battlelord gets too close, back off a bit. Use Laser Tripmines to setup traps for him to walk into and spam Pipe Bombs when possible, detonating them en masse for large damage. Break from cover when necessary to replenish supplies. The Ammo Crate in the EDF drop pod is closer to cover than the one closer to the entrance, though that one has the Explosives Crate nearby.

After defeating the Battlelord with your weapons, the player must climb onto his head and remove a horn, thrusting it into his eye as Duke climbs down. Duke can finish him off with a humiliation move (where Duke repeatedly punches him "right in the jewels") or the player can simply leave him alone where he will die eventually.

The second Battlelord serves as a guard at the dam, shooting down anything that approaches from the air. The EDF was forced to divert Duke Nukem to a secondary drop point and take the Mighty Foot the rest of the way to the dam. Duke meets the Battlelord at the top the dam after clearing out the Pigcops and Enforcers guarding it.

The second Battlelord encountered is a lot harder, mostly because the boss has over 50% more health, a second round where he is far more aggressive and an absence of useful cover, leaving Duke exposed to enemy fire a lot more easily. It behaves (more or less) the same as the first Battlelord does (shooting his main gun, kicking cars at the player, etc.) but he tends to stay at one side of the bridge. Once he is down to half his health, he starts actively chasing Duke across the bridge, denying him as much cover as possible, leaving only a couple places where the cover cannot be kicked away, one of them being a black truck by the explosives cache.

If the player carried the Devastator all the way back from Crash Course, this was the reason for it. The Devastator can offload a greater amount of shots than the RPG and Enforcer Gun can before needing to reload, plus it frequently interrupts his attack pattern, giving the player more time to do damage and relying less on cover and ammo refills.

The Battlelord is assisted by flying Assault Troopers that routinely appear during the battle, but they will focus fire on Captain Dylan. Only if the player attacks them will they return fire.

The Battlelord fought on the Hoover Dam wears armor that bears a striking resemblance to the original Battlelord from Duke Nukem 3D.

In both instances of battles with Battlelords, they have explosive barrels that can be thrown at them and cars that can be kicked around.