The Army Ant is a scrapped enemy for Duke Nukem Forever.

The Army Ant is a soldier mutated to look like a bipedal ant.

This enemy appeared in the 1998 trailer. In it, a few variants of it can be seen. The first one is red colored and can be seen wielding a gun and using melee attacks. The second one behaves the same as the first one, but has a Predator-like cloaking system. The final variant is a large, grey colored version that can be seen chasing the player while they’re on a truck.

The Army Ant appears to have been completely scrapped by 2001, as there are no traces of it in the E3 2001 trailer. 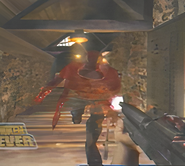 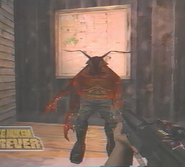 The Army Ant "enhanced".
Add a photo to this gallery
Retrieved from "https://dukenukem.fandom.com/wiki/Army_Ant?oldid=33719"
Community content is available under CC-BY-SA unless otherwise noted.